Israel Prize laureate Rabbi Yitzchak Dovid Grossman is the Chief Rabbi of Migdal HaEmek, founder and dean of Migdal Ohr educational institutions, and a member of the Chief Rabbinate Council of Israel. Rabbi Grossman is famous throughout Israel and the world for his dedicated work on behalf of Israeli children from disadvantaged and troubled homes, having given a future to tens of thousands of youth through his educational network. 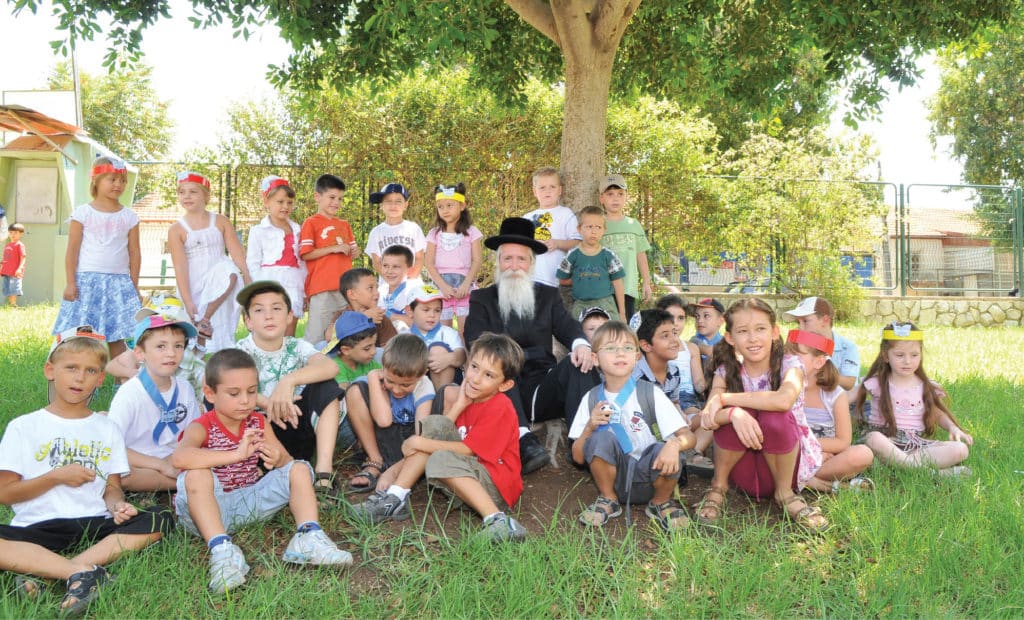 A sixth-generation Jerusalemite and the scion of a prominent Hasidic family, Rabbi Grossman grew up in the Mea Shearim neighborhood of Jerusalem.

Desiring to work for the benefit of the Jewish nation, he moved to the Galilee town of Migdal HaEmek in 1968.

At the time, Migdal HaEmek was populated with immigrants, and its population growth drastically outpaced its socioeconomic and educational infrastructure. With a shortage of jobs and schools, the town was plagued by poverty, crime and alcohol and drug abuse.

Rabbi Grossman embarked on a one-man mission to rehabilitate the youth and give them another chance at a better future. He went straight to the pubs and discos where youth from distressed homes were hanging out and gained their trust with love and caring.

In 1969, only one year after his arrival, the town unanimously elected him Chief Rabbi of Migdal HaEmek, giving him lifetime tenure. At age 23, he was the youngest municipal Chief Rabbi in Israel.

In 1972, Rabbi Grossman founded the Migdal Ohr (Tower of Light) educational network to give children a loving and caring environment from a young age so that they could break the cycle of poverty.

The year of its founding Migdal Ohr enrolled 18 students. By its second year it had doubled in size. Migdal Ohr now enrolls over 6,000 boys and girls in 15 high schools and elementary schools and seven daycare centers.

Through his discussions with youth, Grossman discovered that many children had a father or brother in prison. In 1974 he initiated Shaked – Rehabilitation Through Religion, now operating in all Israeli prisons, which has reduced the recidivism rate of its participants to 20 percent. Participants have one-third of their sentence reduced for good behavior.

Grossman has been offered the position of Chief Rabbi of Israel twice, but declined both times in favor of continuing his work in Migdal HaEmek.

In October 1991 he was honored with the Tolerance Prize, presented by Knesset Speaker Dov Shilansky at a special parliamentary ceremony.

In 2004 he received the Israel Prize for lifetime achievement and special contribution to society and the State of Israel.

The Caring Institute named him International Humanitarian of the Year in 2009.

In 2013 Grossman was awarded the Presidential Medal of Distinction by President of Israel Shimon Peres.

"The religious public requires leaders...whose voice is heeded also in the secular public. It requires leaders such as Rabbi Yitzchak Dovid Grossman of Migdal Haemek."
Yitzchak Shamir​
Former Prime Minister​
"...His inspired educational work with underprivileged youth...gives Israel loyal, well-trained, self-reliant citizens...the new life of these youngsters is the gift of one good, wise, utterly devoted man, Rabbi Grossman."
Chaim Herzog
President
"...The work performed by Rabbi Grossman for the enhancement of Jewish education has become a byword...he has dedicated his efforts and energies to others. Thanks to him, many have already been privileged to benefit from the good influence radiating from Migdal Ohr..."
Shimon Peres
Former Prime Minister
"...The concern and support given to Israel by Rabbi Grossman, by you, and the entire American Jewish Community is a source of special encouragement to us in these historic days..."
Ariel Sharon
Former Prime Minister
"...Your work is vital in ensuring the strength of our Nation. All who participate in this sacred task are making the greatest contribution possible to the People of Israel..."
Moshe Arens
Former Minister of Defense
"...Migdal Ohr's network of school and programs for boys and girls from kindergarten to seminary, for prison inmates, and for families that are in need of assistance, is a sterling example of what can be done to strengthen our Land and our People..."
David Levy
Former Minister of Development and Housing